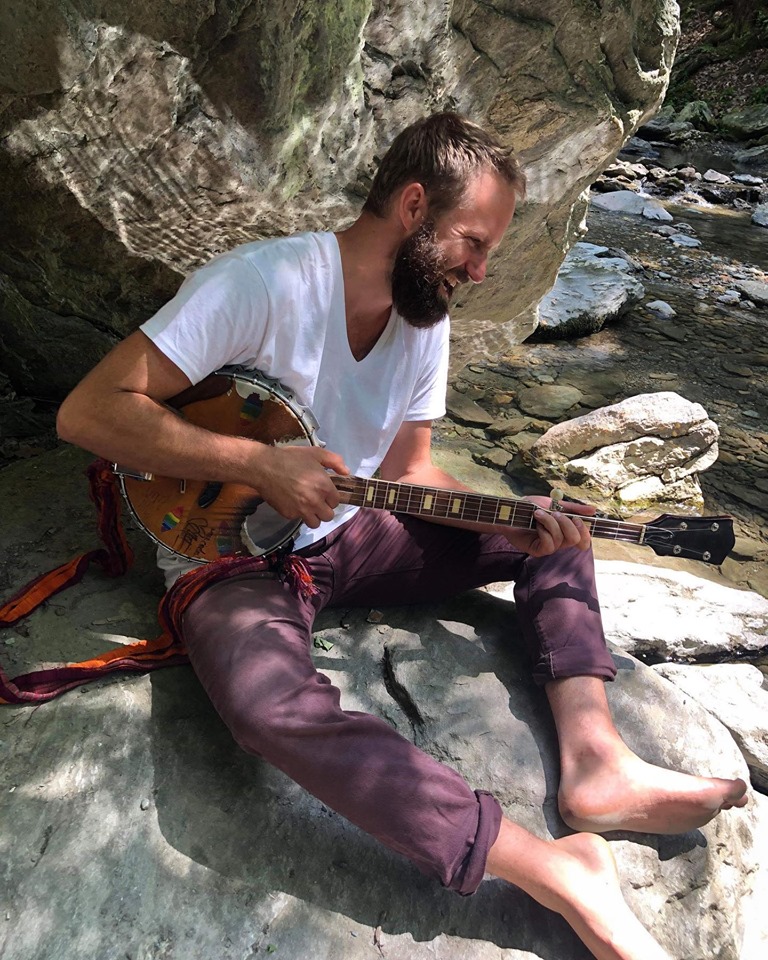 After studying piano accompanying at the Conservatory of Music at Ithaca College, Travis Knapp was awarded the BMI John Lennon Songwriting Scholarship in 2008 (for his song “Before You Go”).  Following an enthusiastic plunge into organic agriculture for a few years, he began performing as a songwriter in 2013 with the release of his first album “Bright New Way.” For 4 years, he served as vegetable gardener and musician-in-residence at the Body Mind Retreats (also home to the Ithaca Zen Center and Sufi Whirling Dervish Center). Travis practices permaculture, wild crafting, and regenerative agriculture, while he continues to explore music as an important form of sound healing and education. He can be found ring-mastering and playing music for Ithaca’s circus events at Circus Culture, or playing piano as the music director of shows at the Kitchen Theater of Ithaca.  As a founding member of the community education band “Rot’n’Roll,” he writes and performs composting and ecology songs which include “Raw Veggies and Greens” from the Grammy-nominated album “Food for Thought.” He also performs and facilitates workshops with the Honey Child Soul Quintet, which is led by Elisa Sciscioli. Live performances of electronic dance remixes of his songs by Astro Hawk (conscious electronic dance music producer) have been getting people moving from NY to NC. The folk quartet The Honeybees emerged out of bi-weekly gatherings at the Kava Lounge in Ithaca. Travis sings locally and across the country at festivals, farms, markets, gardens, schools, houses, cafes, tea lounges, bars, churches, circuses, sidewalks, TV and radio stations, yoga schools, hiking trails, weddings, funerals, showers, wineries, book talks, ecovillages, and art centers – spreading his positive music and ideas wherever they find fertile ground – in hopes of inspiring folks to live honestly and joyfully!