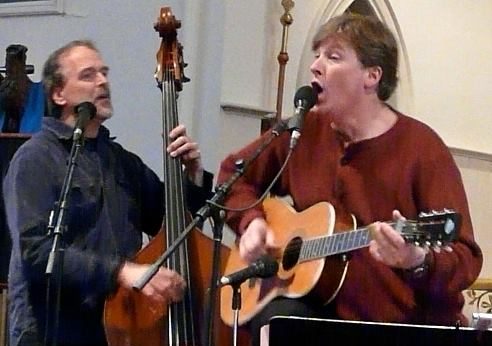 Scott B. Adams is a singer/songwriter, composer, multi-instrumentalist, and record producer who has played at the White House, has guested with Symphony Orchestras and has headlined Big Johnson’s Sports Bar in Hector. (Did we mention Big Johnson’s?) Doug Robinson has performed at Carnegie Hall and is a musician extraordinaire who is a multi-instrumentalist and a much sought after studio and stage performer. He has performed with too many great musicians to even mention.

Scott and Doug have been collaborating since the 90s and as part of the Scott B Adams Acoustic Ensemble have had music featured on PBS television specials and NPR. The duo will be performing Scott’s original music inspired by the Adirondack Mountains, The Finger Lakes and beyond as well of a smattering of tunes yet to be predicted. Scott will be performing on guitars, banjo, and mandolin and Doug will be performing on acoustic bass. Join us for this mostly unplugged and very enjoyable afternoon within the fabulous acoustics of Red Newt Winery.