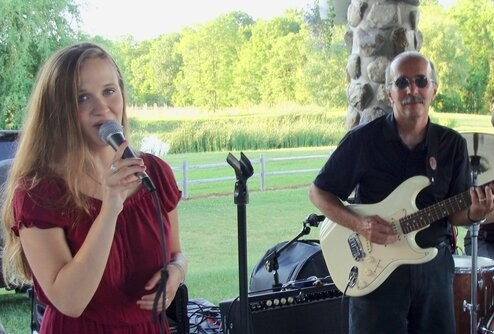 Bob Keefe was born in Los Angeles and raised in Fresno, California, Bob started playing guitar at age 14. His first professional  gig was at 15. He holds a PhD in Music from the University of North Texas and has resided in Ithaca since  1987. He has taught guitar and music at Ithaca College, The University of South Florida, and Cornell University  and has performed with Clark Terry, Phil Woods, Eugene Friesen, Johnny Smith, Steve Morse, and Jack  Petersen. He is the consummate guitarist, loves playing all styles of guitar, and is in high demand as a guitar  teacher.

Vocalist Hannah Martin resides in Ithaca, NY working as a private voice teacher, consultant, and clinician. She has performed alongside faculty members of Ithaca College and Ithaca High School, while also giving workshops to students and educators alike to highlight the importance of vocal jazz and contemporary styles within music curriculum. She currently performs with Ithaca based rock and roll band Backtalk, sits in as the drummer for local children’s theatre troupe Running to Places, and plays jazz gigs with various local musicians.