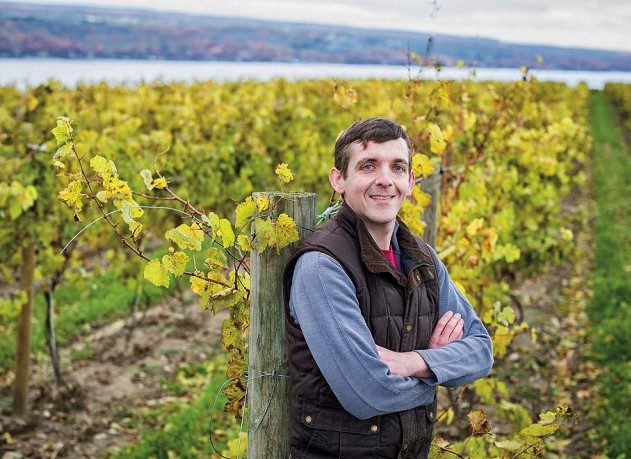 When Kelby Russell set foot on the Harvard University campus as a freshman in the fall of 2005, he planned to pursue a career in nanotechnology. Not soon after his arrival, Russell, a musician, switched to a major in government and minor in economics with the intention of entering the orchestra management business. Thirteen years later, the Newark, N.Y. native is the head winemaker at Red Newt Cellars and Bistro.What caused Russell’s significant change of path? “I think it comes from two sides,” he says. “I was always really interested in food experiences, and then as I got older that could include alcohol.” A trip overseas to Italy after his junior year was a major reason for the shift in Russell’s career vision. As part of Harvard College’s Patterson Travelling Fellowship, Russell was required to outline what he would study and accomplish in Italy. He chose to learn about Italian culture through the lens of food and wine history—a unique objective that Russell says helped his application stand out. For three weeks, he worked on a vineyard in exchange for room and board, and during this time Russell realized his passion for winemaking. “I just kind of fell in love with wine, and I fell in love with the lifestyle of working in the vineyard.”

The other reason for Russell’s interest in winemaking, he says, was the profession’s creative appeal to him as an artist, as music has always played a large role in his life. In high school, Russell was a jazz saxophonist. In college, he was a member of the Harvard Glee Club. And now, he is a tenor in the Eastman Rochester Chorus. “I think the other side does come from the music side, where I loved singing and I loved playing saxophone and loved the artistic side of music,” Russell says. Additionally, as he progressed through college, Russell learned that orchestra management is much less of an artistic profession than it is one of business, with a large focus on labor negotiations and logistics, and realized that it might not “scratch the itch that I wanted it to,” he says.

Russell graduated from Harvard in 2009, and, having departed from his orchestra arrangement plans, returned to the Finger Lakes Region to begin his winemaking career with Fox Run

Vineyards. Over the next three years, Russell expanded his knowledge of the discipline under the leadership of acclaimed winemaker Peter Bell, Fox Run owner Scott Osborn, and vineyard manager John Kaiser. During this time, Russell also took annual winter trips to the Southern Hemisphere, where he gained additional harvest experience at vineyards in either New Zealand or Australia. His experience included Whitehaven Winery in Marlborough, Pipers Brook Vineyard in Tasmania, and Yalumba Winery in the Barossa Valley. “[W]hen you’re breaking into winemaking, it isn’t how many years of experience you’ve had—it’s how many harvests,” Russell says. “So if you can get multiple, then it’s beneficial to you.”

After his final harvest at Fox Run in the fall of 2011, Russell interviewed with Red Newt owner Dave Whiting, who offered Russell a permanent job upon his return to the Finger Lakes from his final trip to Australia. Three days after he came back, Russell began at Red Newt as the assistant winemaker. After the 2012 harvest, he was promoted to head winemaker.

Since then, Russell has approached his job with a unique dedication and excitement. “The fun of being a winemaker—especially at Red Newt now—is that there’s no particularly typical day,” says Russell, whose work focuses on Rieslings, but also Gewürztraminer, Pinot Gris, Pinot Noir, and Bordeaux. “[P]robably 40 days a year we start at 6:30 in the morning, and I’m sterilizing the bottling lines. So, everything is filled with steam and I’m getting our bottling line ready to run for the day so they can bottle wine.” However, there are also some more conventional, workdays. “There are plenty of days in the year where we’re filtering wine, or just working with the wine in general in a much more nine-to-five schedule,” Russell says. “We’re still doing fun things: moving the wine around or tasting it. And, there are days when we do big blending sessions, and those take most of a day to get through to figure out what blends we want to make.”

Currently, the Red Newt staff is in the midst of harvest season, a more busy time which Russell describes as “when the real crux of being a winemaker comes together.” During this time, he says, their schedule varies. “There are days when we spend most of our time in the vineyard getting the vineyard ready for picking and to get things looking the way we want them for harvest, and we’ll work from sunup to sundown,” says Russell. “And there are plenty of days once we get into picking where the cellar here at Red Newt is just a hive of activity from morning until midnight with deliveries of grapes and crushing the grapes … Inside, we’ve got the juice that’s already been pressed off and we’re settling that, fermenting that, and checking on it and running all of our tests. And that usually lasts from about this time of year until Thanksgiving.”

Russell’s favorite part of the year is near the end of the harvest season, he says, when the wine is fermenting and there are 60 or 70 different fermentations of Riesling in the cellar. “[J]ust the fun and the excitement of tasting all of those and seeing what directions they’re going in, and starting to think about what wines they might become or what we want to direct them towards—it’s such an exciting time of year,” says Russell. “And that carries through right to the finish of polishing the wine and getting it ready and bottling it, and getting to see it go out into the wild. But for me, the real of heart of it is those really really early days when it’s still mostly just juice because it’s just barely started fermenting [and] you’re starting to think about what it might become.”

Outside of Red Newt, Russell’s hobbies include running, cooking, golf, and of course, music. “At home I’m either listening to music or listening to podcasts about music,” he says. “And then at home, I spend a lot of time cooking. That’s still a huge passion of mine. I absolutely love cooking. I cook most nights. And then I guess the hobby I have beyond that is golfing, which is provides a nice break from winemaking.”

As head of the winery’s staff, Russell emphasizes his team’s exuberant style. Often, music of all genres will playing in the cellar, which Russell says is a key part of their cellar experience. “I think that I and the cellar team around me are delightfully quirky,” Russell says. “I think people think of winemakers and wine as being a very serious—almost a boring subject in some ways … I think if you spend some time in our cellar and got to know me and our crew—we take things very seriously, but we also have a ton of fun and are a pretty goofy bunch of people, and I think that makes the wines more exciting as a result.”

Austin Lamb is a freelance reporter. He reports on news events, writes feature stories, and manages the Ithaca Times Twitter account. Austin is a 2018 LACS graduate and will attend Syracuse University’s Newhouse School of Public Communications in 2019.